GUYS I FINALLY DID THE THING. HI HELLO

erm since i dont have the time nor energy to create a page for each character ill just put it on the same place. lolzies xd x3s

Rafael is the main (and first ever!) character in the Acrophobia series. He first appeared in Aiden's Notebook of Ideas vol. 3 in May of 2021 (i forgot the date but i'll check soon.) In the drawing, he looked significantly younger and shorter, though that has obviously changed. Rafael is approximately 18 years old, 182 cm tall (6 feet 1 inches) (and oops in the artswap i but 6'3"!! sry lmao) and weighs 85 kilo (190ish pounds) (i had to make that up on the spot in my electives assignment and it just stuck with him.) He's bisexual (🥶?!) and is of Filipino / Southeast Asian descent. (yes the one i keep telling ryan about!!) erm what else. Green eyes and dark brown hair and chestnut brown skin with a bit of freckley stuff going on. He has a very big family with like, like,, like at least 8 siblings i think. OH AND!! HE HAS MAGICAL FIRE HANDS BECAUSE HE LOST HIS REAL ONES

THIS IS FOR THE PERSON WHO GOT MY OC ARTSWAP!!!!!! i will add this section for everybody else as well!! maybe today if i feel like it!!! so anyways. lets see here... rafael can sometimes be very full of himself; willow's usually there to keep him from blowing his top (heh) with his short temper. speaking of short temper, what gets him angriest is someone saying that he isn't "hero enough" or anything regarding to his disabilities. but even though he's a fighter, he's secretly a lover who always snags a girl (or guy) from the villages he visits. so basically the horny bard but a noble fighter. he also likes to cool off with alone time, either with willow as company or just her cat Salamander. he loves food, especially spicy and flavourful food from his home kingdom. he's a funny, charming guy and loves his friends and family. umm i hope that helps? :D

now into a special section of acro characters!!!!! so rafael, being the adventurey guy he is, likes to pack a few essential things with him on his quests. (transcript on the bottom) 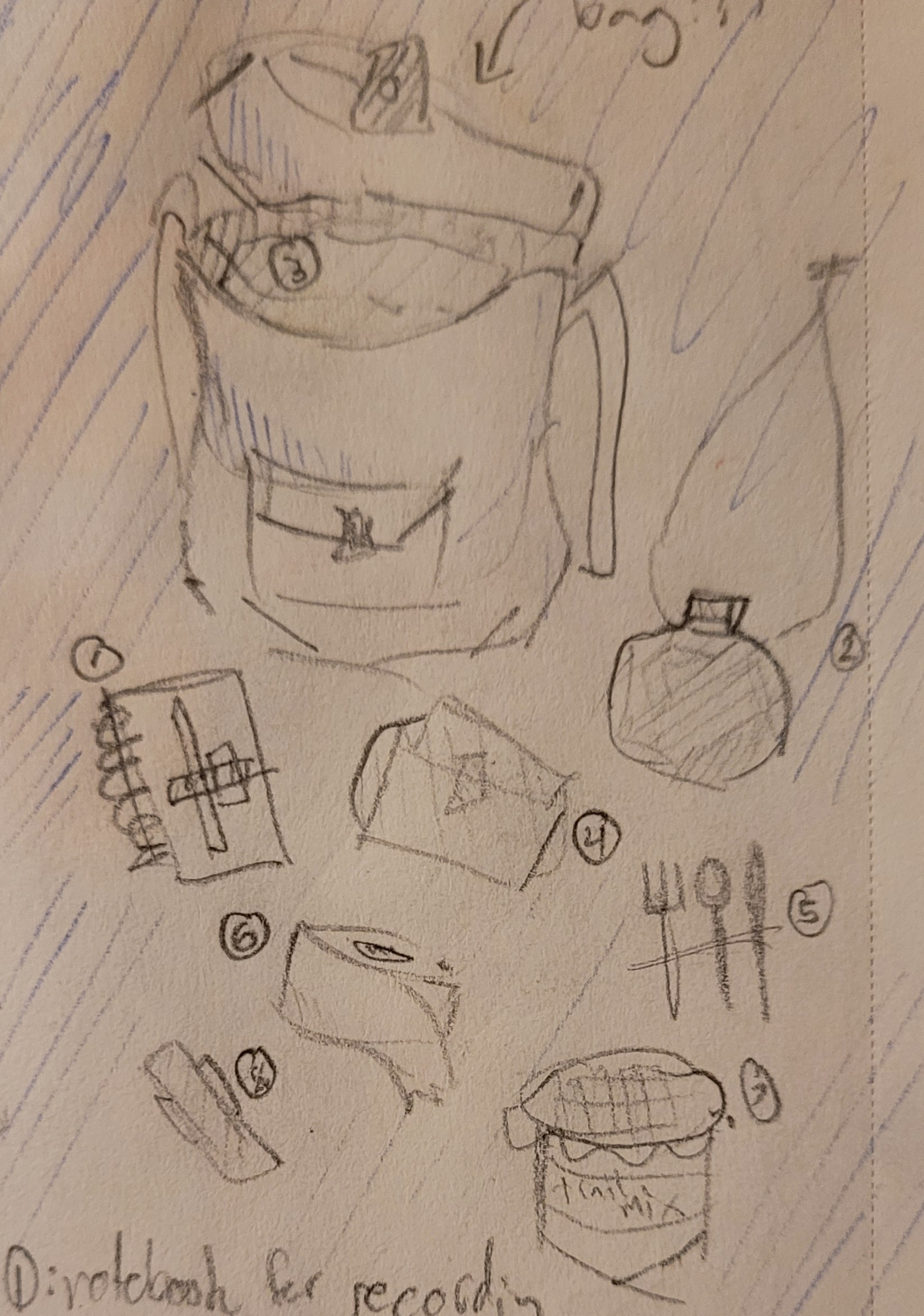 mouse over the images to see them individually! 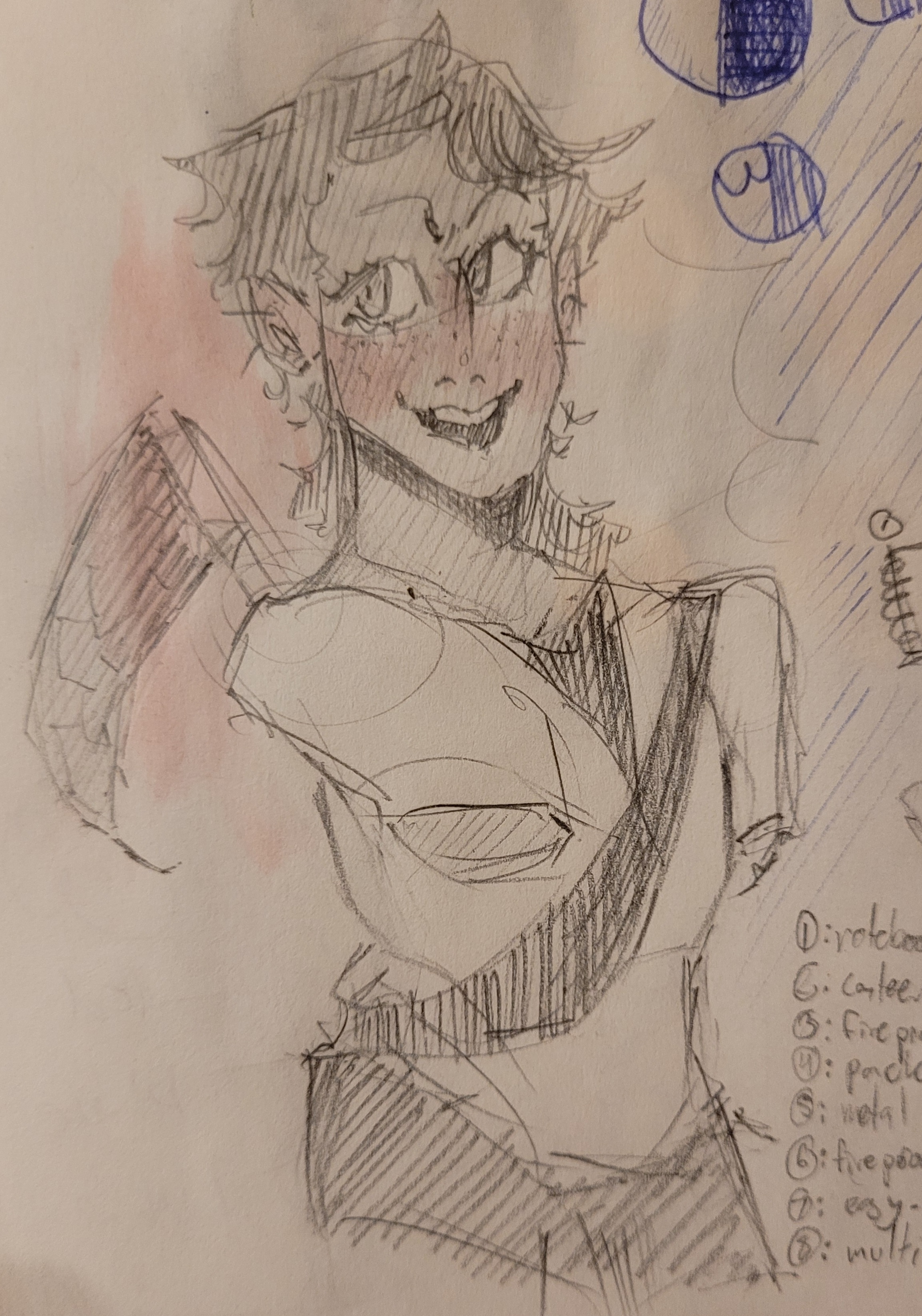 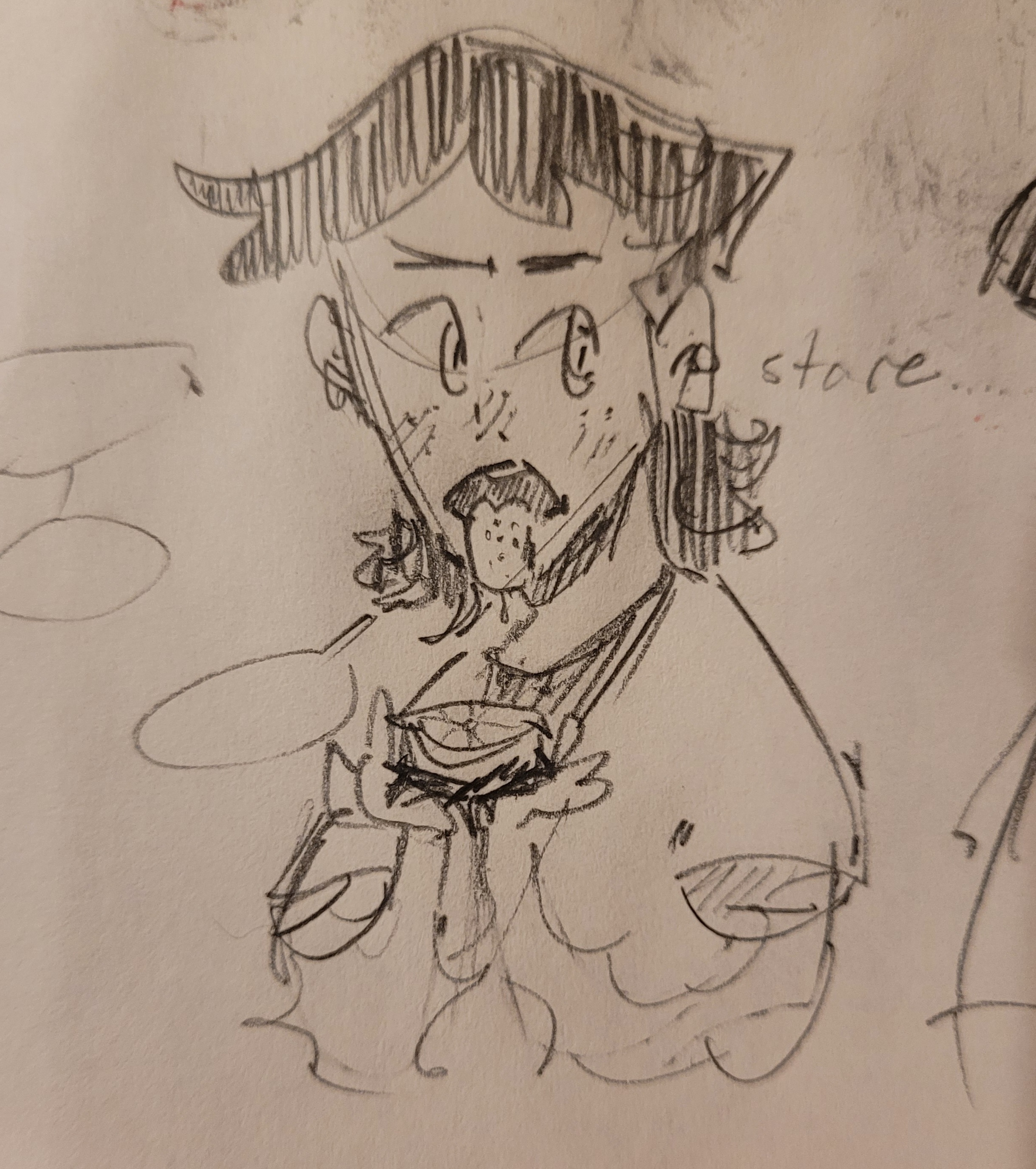 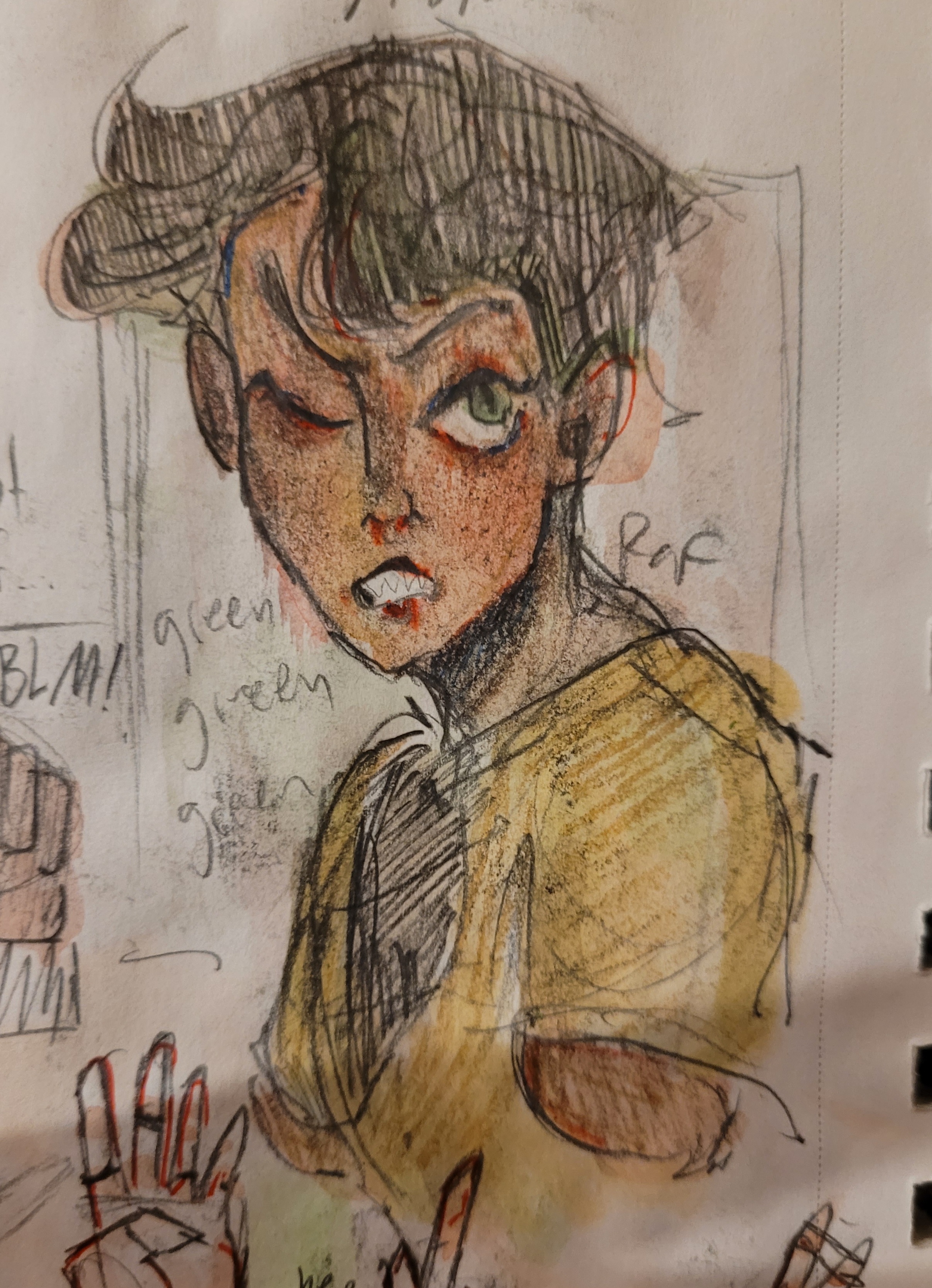 Rafael has a (canon) cousin named Rafael Wong, or Rafael W. They're super best friends and I'm gonna find a way to put Raf W in thsi VN :). Rafael's mother, whose name is still TBD, is a super good cook. Like hands-down probably the best food in the entire Emberlands.

Willow is the second most important main character and like the third one to pop into existence. She first appeared in Aiden's Notebook of Ideas vol. 3 in May of 2021, yet she looked a lot paler and taller. She still had her (then-dirty-blonde) ponytails, but her glasses were rose-tinted and heart-shaped. Willow is approximately 19 years old, 160 cm tall (5 feet 3 inches) and weighs 55 kilo (120ish pounds). She is very good with fire magic and size manipulation-magic-thing-stuff, and sometimes practices spells and hexes on her cat, Salamander. (Salamander is a shorthair white cat, eye colour TBD.) She's lesbian (🥶?!) and is of Indian / South Asian descent. Her family is not that large, her only known immediate family being herself, and her mom. They have a bad relation.

mouse over them to see them individually! 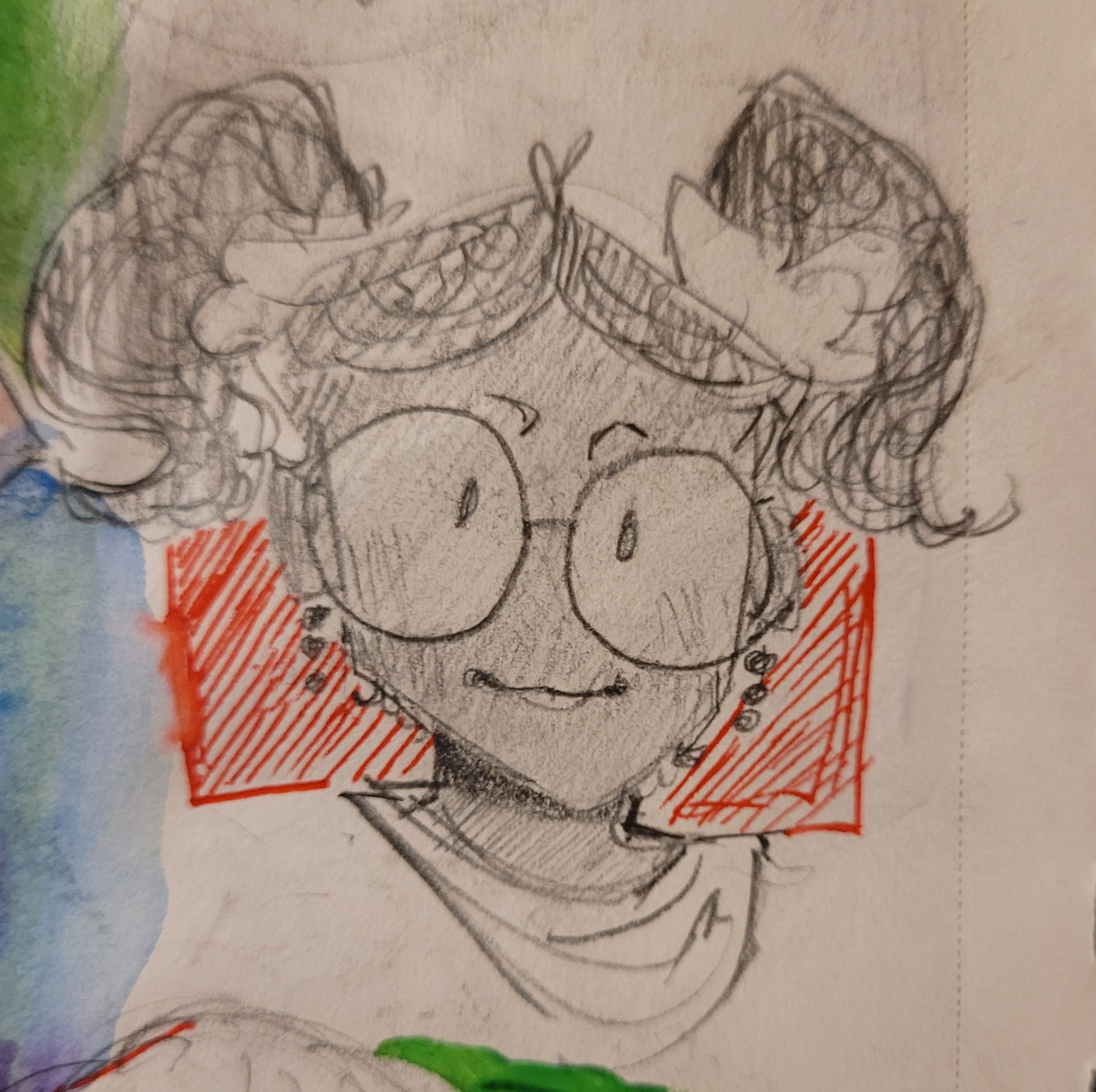 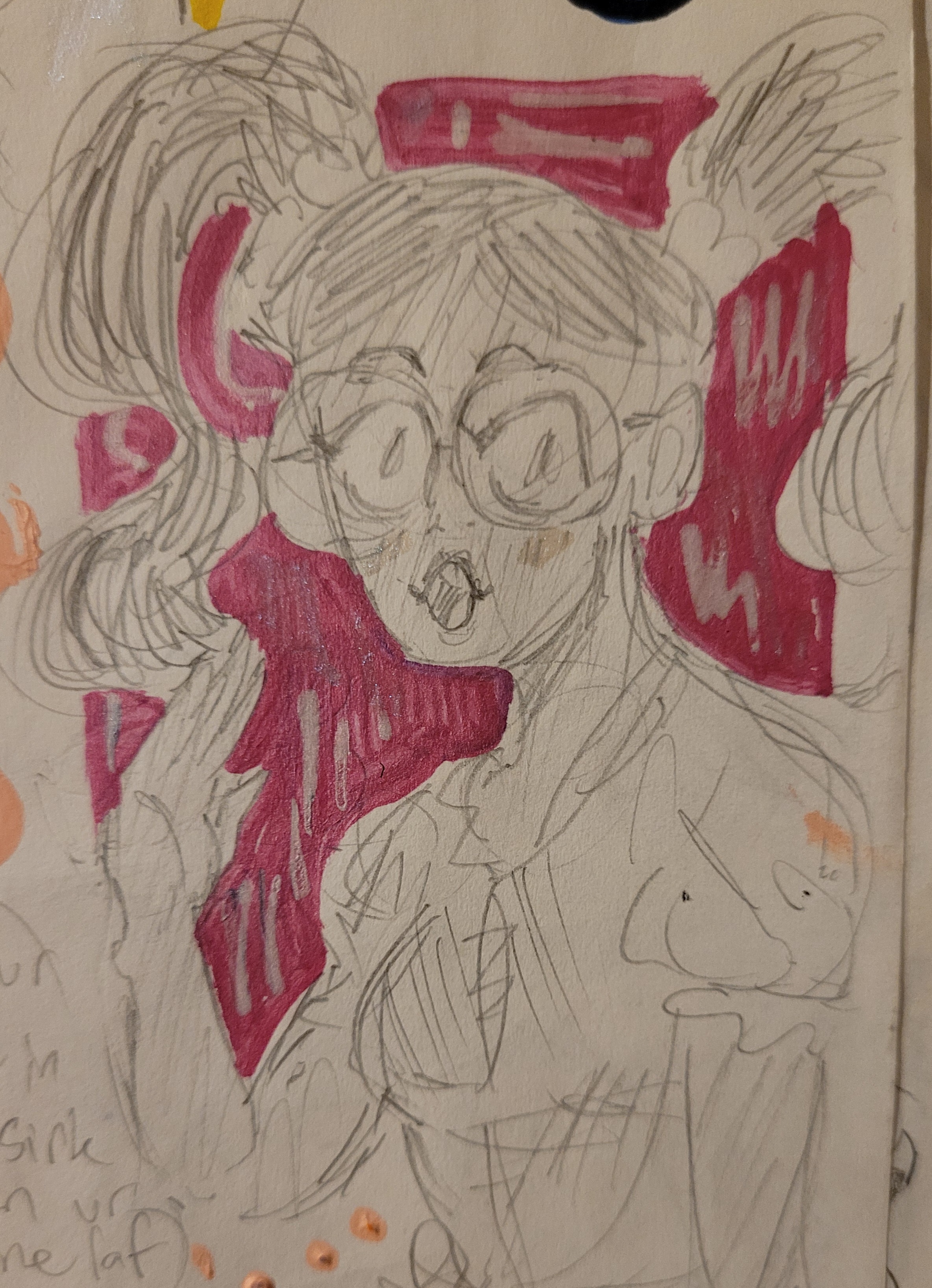 Willow hasn't cut her hair ever, and she keeps it in long, silky ponytails that reach down to her knees. (which isn't that much lol) Willow and Amella are actually distant cousins!!!! Salamander, Willow's pet cat and familiar, was a gift for her 9th birthday from her mother. He was originally supposed to be dissected for a spell but Willow protested against it, so that was the first time her mom caved in.

Leviathan is the third most important main character and the second one to pop in existence. He first appeared in Aiden's Notebook of Ideas vol. 3 in May of 2021, and he looked about the same lol. Leviathan, usually reffered to as Levi, is 19 years old, 175 cm tall (5 feet 9 inches) and 52 kilo (115ish pounds.) His skin has an odd blue complexion which contrasts sharply with his ginger hair, gills on his neck, and weird flappy fin things on his arms and the sides of his face. If you couldn't tell, Leviathan is part, well, leviathan. His mom, Natalia Levine, somehow uh,, somehow did it with a leviathan and there he is. wow. He's straight (🥶?!) and has a girlfriend (double 🥶?!) and is of Hebrew / Jewish descent (tho he doesnt practice any religion...maybe fish religion? fishligion? he died for our fins)

mouse over them to see them individually! 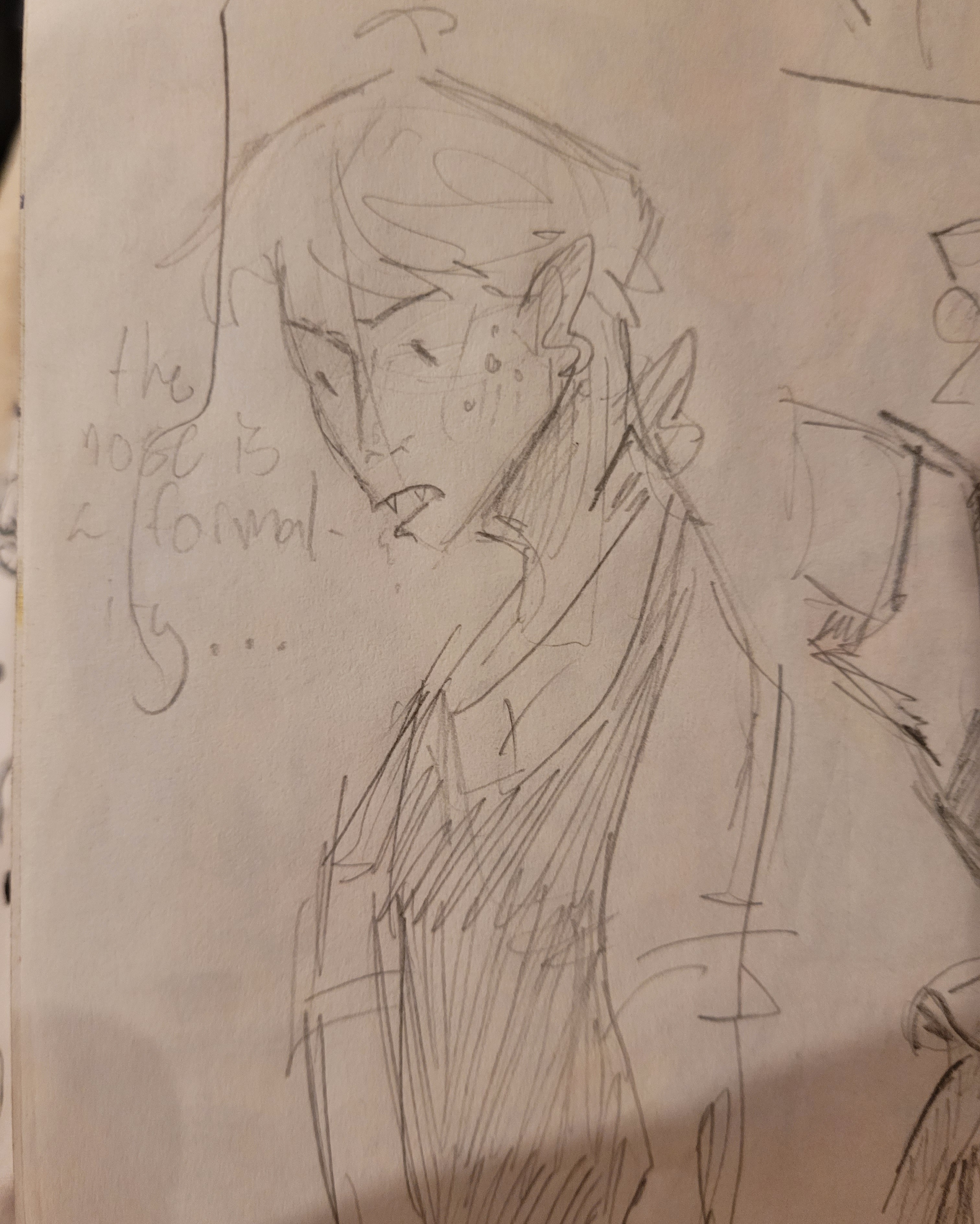 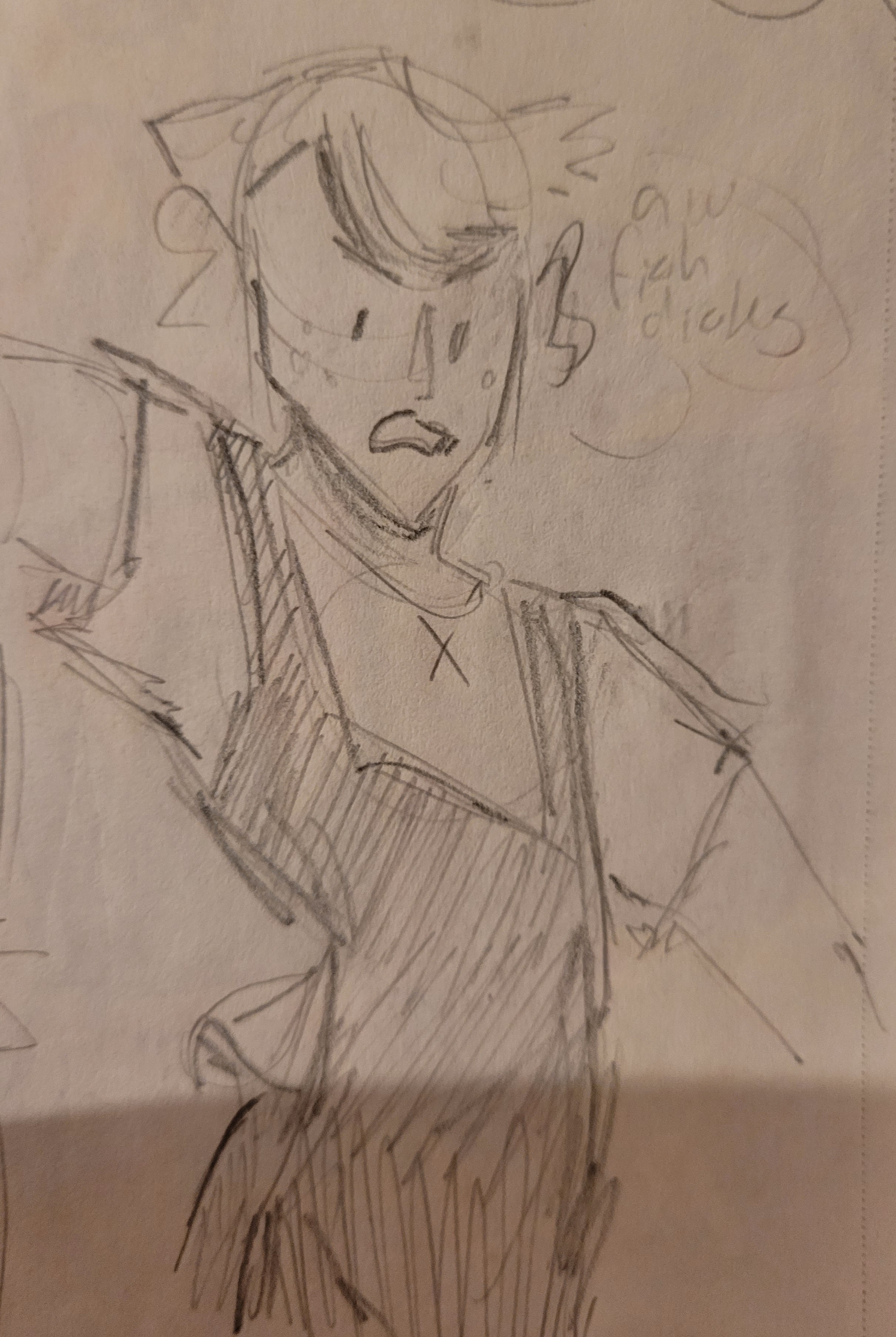 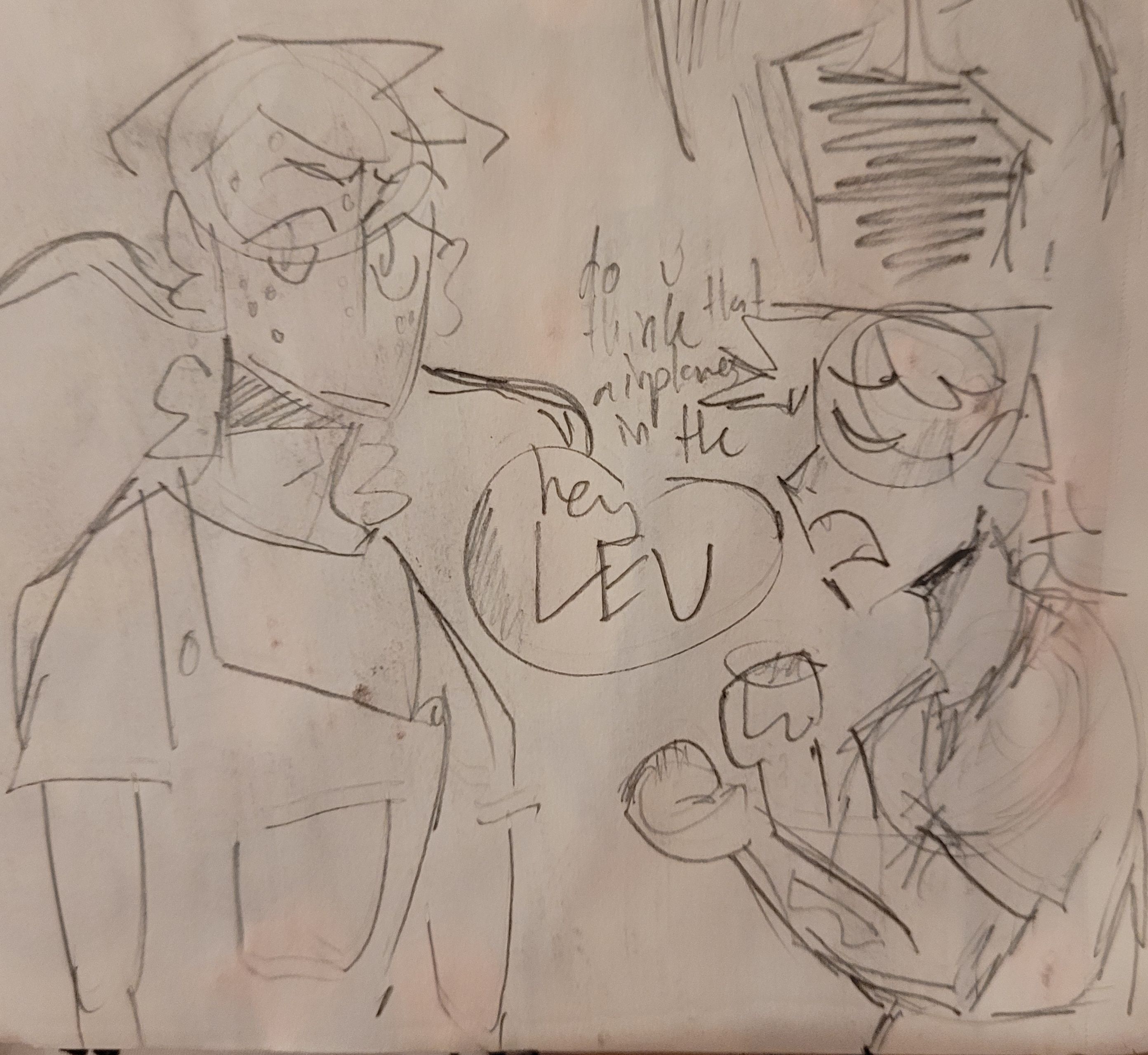 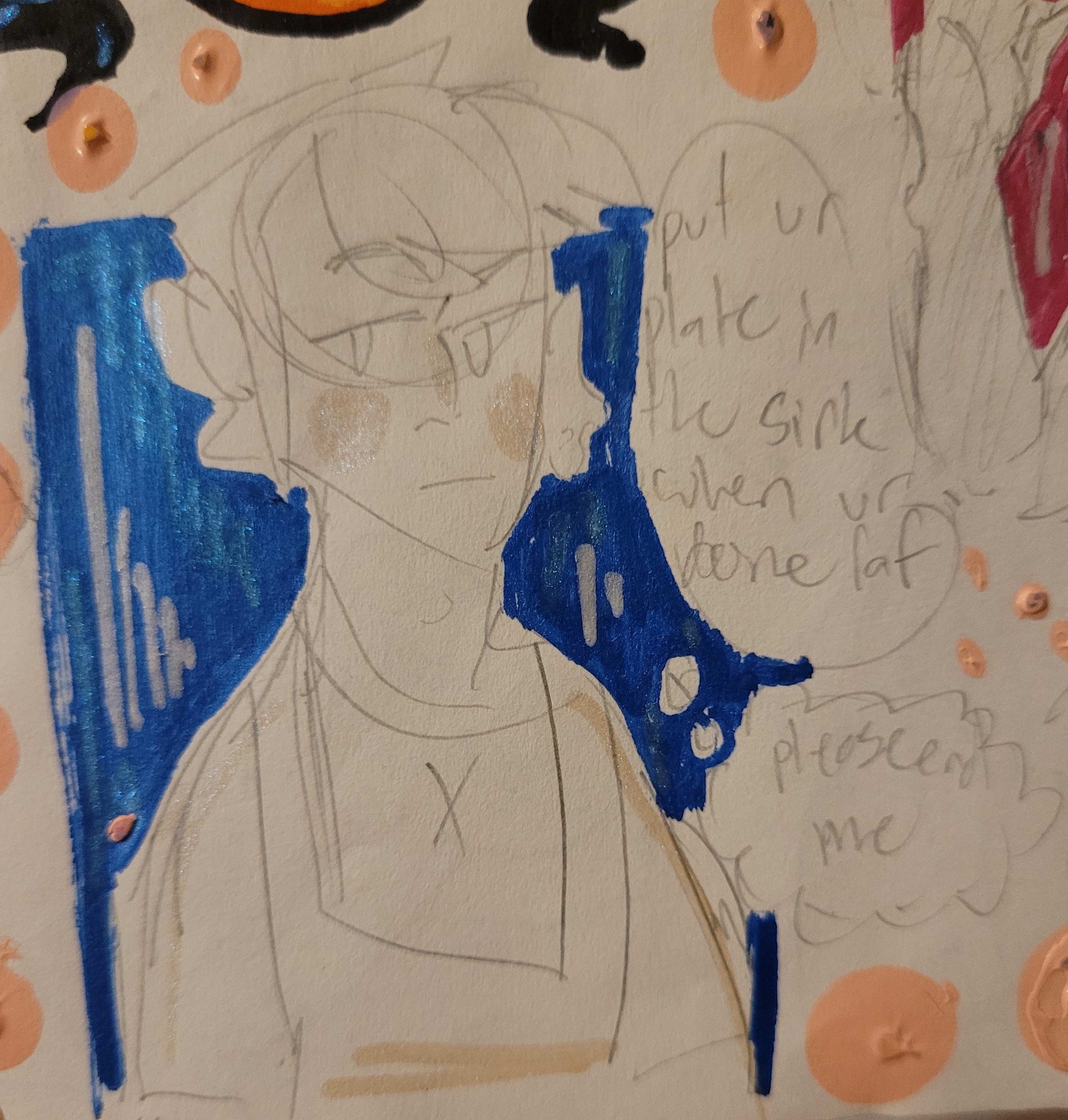 i literally love this sea man so much he's so skinbo

Leviathan has a (non-canon) super secret brother named Thomas Tomasto, and he is a fish. He has made multiple appearances across my notebooks, and I just can't seem to stop. Maybe it's a sign....

nothing here yet! patience is a virtue